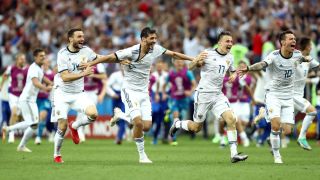 Former Croatia assistant coach Branko Ivankovic warned the nation of the dangers of facing World Cup hosts ahead of their quarter-final against Russia.

Zlatko Dalic's side take on Russia in the last eight in Sochi on Saturday, looking to reach the semi-finals at the showpiece tournament for the first time since 1998.

Back then, Croatia's incredible run was ended by hosts France, who went on to win the World Cup, while Miroslav Blazevic's men claimed third.

In 1998, Croatia scraped past Romania in the last 16, while they did similar against Denmark on Sunday.

Ivankovic, the assistant coach two decades ago, saw similarities between those matches and he knows what host nations can produce at a World Cup.

"This [the win over Denmark] really was a similar game to that one in many aspects. It was very tense to watch and to play," he told Omnisport.

"Back then, we had Germany as our opponents [in the quarter-finals] who were on top of the world at the time and now we have Russia.

"This should be an easier game but we can never be certain or take it easy because Russia is a host and it is always dangerous to play against hosts."

If Croatia overcome Russia, Dalic's side will face either England or Sweden in the semi-finals.