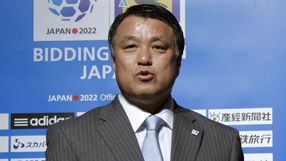 On Monday, a total of 41 games were postponed to a date yet to be determined, with J.League chairman Kazumi Ohigashi saying they would probably be held in July, Japanese news agency Kyodo reported.

Japan had been invited to participate in the Copa America that month and the Japan Football Association (JFA) said the national side would still head to the tournament in Argentina despite the possibility of a scheduling conflict.

However, one day after stating that friendlies against Montenegro and New Zealand in Shizuoka and Tokyo would go ahead as planned at the end of this month, JFA general secretary Kozo Tashima (pictured) said the body "was keeping its options open."

Tashima added that the JFA would reevaluate the situation and make a final decision by Wednesday, a day before coach Alberto Zaccheroni, who flew home to Italy on Saturday, is scheduled to name his team for the two games.

"When I spoke yesterday, both (JFA chief Junji) Ogura and I thought things would head back to normal by Monday," Tashima said.

"But the information we now have and what we had yesterday is different, and it could change again tomorrow for all we know."

Tashima said the planned power outages announced by the government on Sunday was one reason for the reconsideration, given that national team matches in Japan are held at night and an afternoon kick-off would generate a smaller tv audience.

With the lack of power, trains have also stopped running, which would make it impossible for fans to actually reach the stadiums.

"We have to look at all the factors, like travelling to and from Shizuoka (southwest of the capital)," Tashima added.

"We are keeping all options open. We will operate on accurate, correct information. What we won't do is make a decision based on whim."

The J.League's Ohigashi added that if the situation did not improve, more games could be postponed leading to a major overhaul of the 2011 football calendar.

"Things are very serious right now," Ohigashi said at a news conference at the league's headquarters in Tokyo.

"With the aftershocks continuing and (us being) unable to guarantee complete safety at all the stadiums, the J.League has made the decision to cancel all J1, J2 and Nabisco (League) Cup matches for the rest of March.

"The J.League, Nabisco Cup fixtures are tight as it is. We have no choice but to play games in July. The plan is to play the existing number of J.League and Nabisco Cup games, and to do that we have to play during the Copa America.