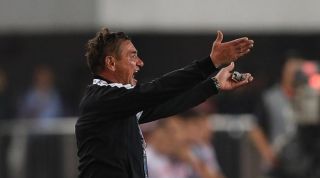 Gamba produced a dramatic fightback to beat Sanfrecce Hiroshima 3-2 at the home of Urawa Reds just under a fortnight ago and secure the J-League Cup for the first time in seven years.

Hisato Sato's double had given Sanfrecce a two-goal lead, but Patric struck either side of half-time to and Kotaro Omori won it 19 minutes from time to complete a remarkable turnaround.

Urawa will be hoping for more celebrations at their stadium this weekend, as victory over second-placed Gamba will ensure they win the J-League title with two games to spare.

Mihailo Petrovic's side beat Yokohama F Marinos 1-0 in their final game before the three-week break to stand on the brink of being crowned champions for the first time since 2006.

They hold a five-point lead over Kenta Hasegawa's Gamba and know a win will ensure they cannot be caught ahead of their final two games against Sagan Tosu and Nagoya Grampus.

Kashima Antlers are seven points adrift of the leaders ahead of their home clash with Kawasaki Frontale, while Sagan are a further point back as they prepare to travel to relegated Tokushima Vortis.

It also promises to be a tense weekend for sides at the other end of the table, with second-bottom Cerezo Osaka travelling to a Vegalta Sendai side just four points better off.

Time is also running out for Omiya Ardija, who picked up just one point from their three league games before the break and dropped into the bottom three as a result.

Omiya host Kashiwa Reysol on Saturday in another crunch clash in Saitama, while fourth-bottom Shimizu S-Pulse will hope to regain the momentum from their victory at Frontale when they face Grampus.

Ventforet Kofu will be out to inflict more misery on Sanfrecce by securing a third consecutive win which could ensure they are safe, while Vissel Kobe entertain Marinos and Tokyo host Albirex Niigata in the other games to be played on Saturday.