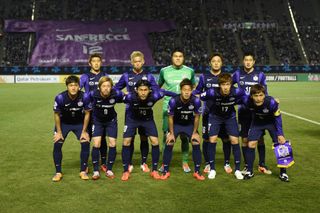 League leaders Kashima Antlers are a point clear at the top after back-to-back wins and will fancy their chances of claiming an eighth victory in 11 matches.

Sanfrecce sit second, while Vissel Kobe are a further point back in third – equal on 19 points with fourth-placed Urawa Reds.

Ryo Adachi's Vissel side have relied on their two in-form Brazilian strikers.

Veteran Marquinhos, 38, has enjoyed several good seasons previously in the J-League and this shapes as being another, after six goals to start the campaign.

Sanfrecce were well beaten by the league-leading Antlers earlier this season and this is another test of their title credentials.

Kashiwa Reysol are on a 10-match unbeaten run in all competitions ahead of their clash against the Antlers.

If results go their way, Urawa Reds could easily be top come Saturday night as they prepare to host mid-table FC Tokyo at Saitama Stadium.

Sagan Tosu need to bounce back from their loss last time out when they visit a Shimizu S-Pulse side also beaten in their last outing.

Newly promoted Tokushima claimed their first win in 10 by beating Ventforet Kofu 1-0 for their first points of the campaign.

Vegalta Sendai, who are second last, also have just one win ahead of the encounter.

Elsewhere, Yokohama F Marinos host Gamba Osaka and Cerezo Osaka visit Nagoya Grampus in a battle between two teams in the lower half of the table.

Kawasaki Frontale take on Ventforet Kofu and Omiya Ardija will be looking to climb out of the relegation zone when they host Albirex Niigata.