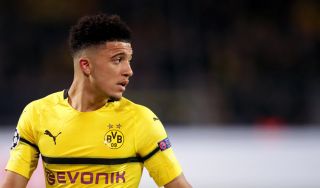 Marco Reus headed in a stoppage-time equaliser as Borussia Dortmund recovered from three goals down to draw at home to Bundesliga bottom side Paderborn.

The visitors have only won once in the league so far this season but looked on course for a remarkable victory at Signal Iduna Park as they went in at half-time with a commanding lead – only to leave with a 3-3 draw.

Streli Mamba finished off a swift Paderborn counter to put them ahead with five minutes on the clock before the forward doubled his tally for the evening as he latched onto Ben Zolinski’s ball over the top and finished well.

The game looked over before the interval as Gerrit Holtmann burst through down the left and tucked away his chance after 43 minutes.

Dortmund rallied after the interval and England international Jadon Sancho started the comeback with a well-taken strike moments after the restart.

Reus saw a fine effort saved by Leo Zingerle soon after as the tide of the match turned in favour of the hosts.

They had to wait for the 84th minute for the second goal to come, however, this time Axel Witsel got his head to a hopeful Mats Hummels ball into the box to set up a tense finale.

Paderborn could not hold on, Sancho spurning a decent chance before crossing perfectly for Reus to head in a dramatic equaliser to take Lucien Favre’s side to within a point of second place before the rest of the weekend’s games.

Meanwhile in Ligue 1, reigning champions and runaway leaders Paris St Germain eased to a 12th win of the season at home to Lille.

Mauro Icardi tapped in Idrissa Gana Gueye’s cross to open the scoring with the 2-0 victory secured before the interval courtesy of a cool finish by Angel Di Maria.

PSG spurned chances to further increase their lead but were rarely troubled as they racked up yet another three points.

Levante moved into the top half of LaLiga as they saw off Real Mallorca 2-1.

After a goalless first-half, Levante took the lead through Roger Marti, only for the visitors to hit back after 65 minutes as Daniel Rodriguez Vazquez struck.

Ruben Rochina would make sure of the points for the hosts, who survived a late red card for midfielder Jose Campana to seal the victory.