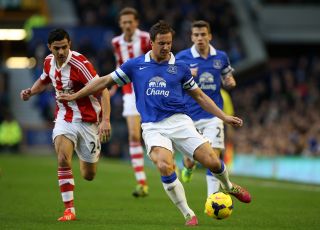 Everton have only lost once this season in the Premier League - every other side have been defeated at least three times - to sit four points adrift of leaders Arsenal after 16 matches.

The 4-1 win over Fulham last weekend kept the team's unbeaten home league record in 2013 intact and Jagielka believes Everton are capable of staying in the hunt for a top-four place.

Martinez brought in Romelu Lukaku, Gareth Barry and Gerard Deulofeu on loan during the close-season and the Everton captain expects more quality recruits to arrive at Goodison Park when the transfer window opens next month.

"We have got ourselves into a good position and if we pick up a few more wins before January it will make us a more attractive team for players," he told the Liverpool Daily Post.

"The transfer market is always difficult as we do not have vast funds, but if the manager can bring in some players then the boys already here will be thankful for that.

"Hopefully, we can keep our best players here for the rest of the season and bring in some more.

"We'd love to be up there in the Champions League places. We have our eyes on the top four, but we know it will be difficult as there are five or six other clubs competing for those places."