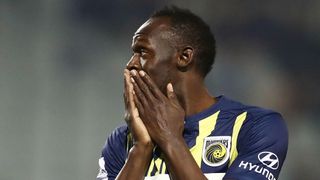 Usain Bolt could force his way into Jamaica's national team if he adds "a little bit of skill" and impresses while playing for a club side, according to the country's Football Federation president Michael Ricketts.

The eight-time Olympic gold medallist and world-record holder over 100 and 200 metres has long held a desire to make a permanent switch to football and began training with A-League side Central Coast Mariners in August.

His association with the Mariners saw him make appearances in friendly matches, while the club even offered him a full-time contract.

That deal was reportedly turned down, with Mariners boss Mike Mulvey claiming negotiations were "ongoing" despite Bolt now being absent from training.

However, Ricketts – who wants him to represent a Jamaican club – has given Bolt a reason to not give up on his dream, with international recognition seemingly within reach.

"I am a little disappointed that Usain hasn't signed up with a Jamaican club," he told ESPN. "That would give us a chance to see a lot more of him.

"If he shows he's good enough to make the Jamaican team then he will be called up, but we are following his progress - we are watching him closely.

"The coach will make a decision, but we would love to see him in a serious, real match situation.

"We are hopeful because Usain would certainly be a crowd puller. If he turns up in a Jamaican outfit then a lot of people would want to turn up and watch Usain Bolt play football.

"Usain has a special attribute in his speed. If he can add a little bit of skill, some flair, he could supplement this Jamaican team.

"The players would certainly welcome someone like Usain. I have had informal discussions with some of them and they are excited at the prospect of playing with Usain.

"If he can make the transition from being a superstar on the track to being a good enough football player, then we will certainly call him up.