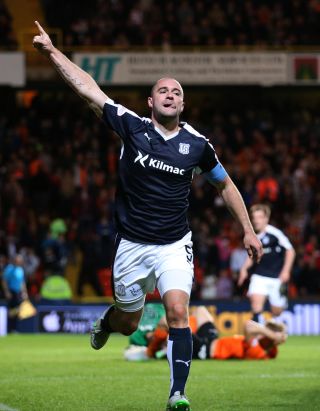 Dundee have confirmed the appointment of James McPake as their new manager, with experienced coach Jimmy Nicholl arriving as his assistant.

Former club captain McPake took over on a caretaker basis for the final game of the season after Jim McIntyre was sacked in the wake of their relegation.

The 34-year-old has now been charged with leading the Dens Park club back to the Ladbrokes Premiership after being given the job on a rolling contract.

The former Livingston, Coventry and Hibernian defender was the club’s under-18s coach and also took charge of the reserve side last season. He was forced to quit playing prematurely after suffering a serious knee injury in a Dundee derby on January 2, 2016.

Nicholl arrives from St Mirren, where he was part of Oran Kearney’s backroom team. He combined that role with his job as assistant to Northern Ireland manager Michael O’Neill.

The 62-year-old former Raith Rovers, Millwall and Cowdenbeath manager has previously coached with the likes of Dunfermline, Aberdeen, Kilmarnock, Hibernian, Falkirk and Rangers.

Managing director John Nelms revealed he had held “multiple interviews” with six candidates before deciding McPake’s passion and Nicholl’s experience was the combination he wanted.

Nelms added on Dee TV: “We narrowed it down to a few candidates at the very end and then literally over the last two days we sent out letters to the candidates who didn’t make the cut. They were fine candidates and I think they would have done a great job for Dundee.

“During that time we took a lot of advice from a lot of people. We did a lot of background checks because it was very important that we got the team right.

“If we were going to go with a young manager we had to make sure he had a support team around him that will allow him to be successful and we think we’ve got that this time.”

Nelms added: “James has been at the club for five years now. People don’t realise but he was actually a first-team coach when he was injured, all the way back when Paul (Hartley) was here.

“He’s been our under-18s and reserve team manager and we really liked the way he works.

“He’s a young manager and we know for a fact he’s going to give us everything for Dundee Football Club. That’s what we really want.

“Jimmy Nicholl as his number two is going to give him all the support that he needs.

“There are critical times during a match where a young manager will be flipping through his file for what he should be doing and there is somebody next to him who’ll be saying, ‘Look, we’re fine now’ or say, ‘Let’s look at these options for changes’.

“I think the two of them together are going to be a really strong team for Dundee Football Club.”