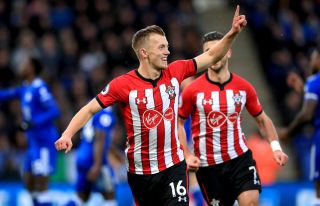 James Ward-Prowse has been called up to the England squad after Fabian Delph, Ruben Loftus-Cheek and John Stones withdrew through injury.

Gareth Southgate’s men kick-off Euro 2020 qualification when the Czech Republic visit Wembley on Friday, before they head to Montenegro next Monday.

The England squad convene at St George’s Park for the double header on Monday, but the initial 25-man squad named last week has become a group of 23 due to injuries.

Delph, Loftus-Cheek and Stones have all pulled out through injury, leading Southgate to turn to in-form Southampton midfielder Ward-Prowse.

A statement from the FA read: “James Ward-Prowse has been called up to the England squad ahead of the UEFA EURO 2020 qualifiers against the Czech Republic and Montenegro.

“The Southampton midfielder, who won his only senior cap in March 2017, will link up with the Three Lions at St George’s Park on Monday afternoon.

Delph was replaced less than an hour into Manchester City’s FA Cup quarter-final win at Swansea, which team-mate Stones missed with a groin injury.

Loftus-Cheek came on as a second-half substitute as Chelsea lost to Everton on Sunday, but has since withdrawn through injury from the England squad bolstered by the addition of Ward-Prowse.

The 24-year-old was Southgate’s captain at under-21 level and has flourished under Saints boss Ralph Hasenhuttl, who has helped add aggression and goals to the midfielder’s game.

Ward-Prowse has scored six goals since the turn of the year, including stunning free-kicks in Southampton’s last two matches, and was in such impressive form that his omission from the initial squad caused debate.

“We love Prowsey,” Southgate said at last week’s squad announcement. “I’ve been accused of being a father of Prowsey over the years!

“This most recent spell is his best spell since we capped him before. He is, I would say, a world-class deliverer of set-plays.

“But he’s only recently got back into the team at Southampton. I think we’ve got some (good) midfield players and it isn’t a straightforward selection.

“We’re four months on from our last game. You could look at Fabian Delph and say he hasn’t been playing for Manchester City, but he was our best player against Croatia.

“So, trying to balance all of that has been difficult this time. There is no question of that, but we have qualified for a semi-final in the summer.

“It would be strange to make huge changes to that squad, but we’ve added another young player in Declan (Rice).

“We know there are some players just on the fringes that we wouldn’t hesitate to call in, both in terms of their ability but also in the case of a player like James Ward-Prowse and his character, he’s absolutely the sort of character you want around the squad.”

There has been speculation that Jordan Henderson would be pulling out of the England squad with the ankle injury that forced him off against Bayern Munich in last week’s Champions League quarter-final.

“He will go to the national team,” the Reds boss said. “He has two or three days still at Melwood, but it still looks positive.

“When it looks positive and he can train, he will go to the national team. He was not able to play, but it’s not that serious. In three or four days, it should be fine.”