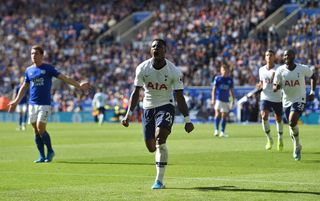 Jan Vertonghen has revealed Tottenham’s VAR pain after their controversial defeat at Leicester.

Son Heung-Min was ruled to be fractionally offside in the build-up to the goal, which would have put Spurs 2-0 up.

"There's a lot of frustration but we need to move on."@MoussaSissoko gives his verdict on today's defeat.#THFC ⚪️ #COYSpic.twitter.com/j6oakx8Dme— Tottenham Hotspur (@SpursOfficial) September 21, 2019

Instead Ricardo Pereira and James Maddison struck to win it for the Foxes after Harry Kane’s first-half opener.

Vertonghen said: “It’s painful. Man City probably felt the same in the quarter-final of the Champions League last season. It was the same distance.

“Obviously you have to trust the VAR to make the right decision. It went our way in the first half (after Wilfred Ndidi’s disallowed goal), their way in the second.

📺 After consulting the VAR, referee Paul Tierney has overturned the goal because of offside in the build-up— Premier League (@premierleague) September 21, 2019

“It makes football a different game, you know? It takes a lot out of it. It’s for the good but it has changed a lot.”

Pereira levelled just five minutes after Aurier’s goal was chalked off with Leicester gaining momentum and belief from the decision.

It took around two minutes for VAR to make a call but Vertonghen remained pragmatic.

He said: “The game goes on. It takes a long time to make these decisions. I think we also deserved a penalty in the first half on Danny Rose – it looked like one.

It was the third time in four matches Spurs had lost a lead and Vertonghen admitted they needed to rectify the problem.

“It’s something to look at, definitely,” said the defender. “Apart from Olympiacos, we’ve done well in these games. But it is making it even harder. If you come back from behind you feel better.”

Tottenham are winless on the road in the Premier League since January but Leicester now sit third.

The Foxes have lost just four times in 17 games under Brendan Rodgers – and once this season – and the manager was pleased with his side’s performance.

He said: “It is so important we play an aggressive game, our pressing was very good and everyone was synchronised. You have to be, or at this level you would be punished.

“That gives the confidence to pass the ball. That was key from the first day we walked in and we reminded them in the team meeting what we are about.

“Constant messages, constant focus and when they do that, they can compete.”