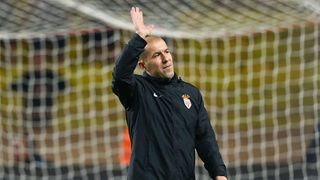 Monaco head coach Leonardo Jardim has no fears over his vibrant young side being shut down by Juventus as Barcelona were in the quarter-finals of the Champions League.

The Ligue 1 leaders host Juventus in the first leg of a keenly anticipated semi-final at the Stade Louis II on Wednesday, their swashbuckling style having won countless admirers during the course of their high-scoring triumphs against Manchester City and Borussia Dortmund.

They will face a different challenge in the shape of Juve and their experienced backline, who left Lionel Messi, Neymar and Luis Suarez without a goal to show for their efforts over 180 minutes during the previous round.

"I think that we'll score in their stadium too," said Jardim.

"We scored three at Dortmund, three at City and also a couple at Tottenham."

Nevertheless, such confidence does not necessarily mean a cavalier approach.

"Juventus are very different to Dortmund and City," said Jardim.

"Those clubs are more attack-minded and less focused on defence. We'll need to pay attention to transitional phases in both defence and attack.

"When they're well set up they are difficult to score against so we'll need to move the ball quickly going forward."

Monaco will assess Tiemoue Bakayoko after the midfielder broke his nose in a training-ground accident with defender Kamil Glik last week.

He trained wearing a protective mask on Tuesday and Jardim added: "We'll look at Bakayoko tomorrow. Maybe he'll need a new mask. There's one due to arrive tomorrow.

"We'll be 100 per cent physically and mentally ready for this match."