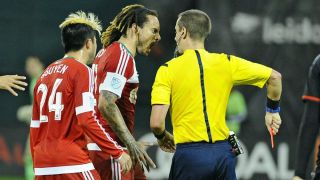 Jermaine Jones is in limbo.

The out-of-contract U.S. national team midfielder is interested in returning to MLS but says the league's latest offer is a "joke." He has explored the possibility of going back to Germany but says a six-game suspension has limited his value.

As Jones looks to build form and fitness ahead of this summer's Copa America Centenario, he remains a man without a club.

"It's a little bit ridiculous, everything," Jones said Thursday, according to the Associated Press. "It's really crazy."

MLS slapped the 34-year-old with a six-match ban after he aggressively made contact with referee Mark Geiger at the end of the New England Revolution's playoff loss to D.C. United in October. FIFA regulations require that such a suspension be enforced across leagues, and German clubs apparently have cooled their interest because only 16 matches remain in the Bundesliga campaign.

"If you have a player with six games suspended, it's tough to bring him in," Jones said. "Then you have maybe 10 games. It's not easy for all the other teams, and then I feel like it's unfair that you close a window for a player who did a lot for this country and for this sport here."

While Jones is open to returning to the Revolution, he said the club's latest offer is "less than 20 percent" of what he made in 2015, when the MLS players union listed his guaranteed compensation as $3.05 million.

"If they don't value my level here in the United States, then I want to go back to Europe where the people respect that and offer me a good contract," said Jones, who has 56 caps for the U.S. "That makes me mad, especially to hang around now here and don't really know what you want to do."

He added: "Right now it's MLS who really put stones in the way. That makes me a little frustrated. I told everybody, 'If you bring me the correct contract, I'll be open to stay in MLS. But if not, I don't want to stay here.'"