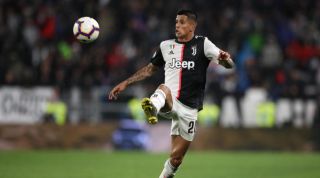 Manchester City are closing in on the signing of Juventus full-back Joao Cancelo, according to Goal.

Danilo, who will move in the opposite direction as part of the deal, has agreed personal terms with the Serie A champions, paving the way for the move to go through.

City will also pay £27m to secure the former Valencia man's services, with Cancelo set to depart Turin after just one season at Juve.

The converted winger looks set to compete with Kyle Walker for the right-back berth at the Etihad Stadium, although there have also been suggestions that he could be deployed on the opposite flank.

Cancelo impressed for Juventus in their final season under Max Allegri in 2018/19, making 25 Serie A appearances as the club won its eighth consecutive Scudetto.

Danilo, meanwhile, played 59 games for City in all competitions during his two campaigns in Manchester.