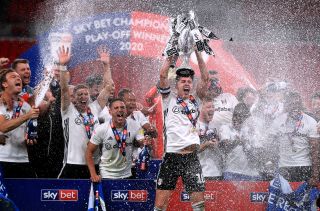 Left-back Joe Bryan was the unlikely Fulham hero in the Sky Bet Championship play-off final as his extra-time brace earned a 2-1 victory over Brentford at Wembley and an instant Premier League return.

In a tense and subdued west London derby, Scott Parker’s side created the better chances, but had a terrible misjudgement by Bees goalkeeper David Raya to thank for the opener in the 105th minute.

Bryan’s set-piece from 35 yards beat Raya at his near post and, while there were further goals in the second period of extra-time, it was this error by Brentford’s Spanish keeper which proved crucial.

The Craven Cottage club will earn around £135million for bouncing back from relegation last season and this result also gives rookie boss Parker a first success of his fledgling managerial career.

After his opener, Bryan grabbed a second in the 117th minute to confirm the result and, even though Henrik Dalsgaard pulled one back for Brentford, they will start life in their new ground still in the Championship.

Parker made a surprise call before kick-off, with Aleksandar Mitrovic only named on the bench after a hamstring injury. It meant four-goal striker Aboubakar Kamara led the line for the Whites.

Fulham’s intentions were evident from early on, with Brentford playmaker Said Benrahma fouled twice during the opening eight minutes before Bees goalkeeper Raya had a nervy moment when he miscued his pass out from the back.

While a lot of the pre-match focus had been on Thomas Frank’s potent strike force, Josh Onomah went closest in the opening exchanges for Fulham when he forced a smart save after 18 minutes following a neat piece of skill inside the area.

Not long after the drinks break referee Martin Atkinson showed the first yellow card to Fulham midfielder Harrison Reed, who was fortunate it was only a caution, with Christian Norgaard caught high on the ankle.

Given the financial reward and the lure of top-flight football, it was predictably tense and remained goalless at the break.

Fatboy Slim’s ‘Right Here, Right Now’ echoed around the empty stadium as the second period got under way and Neeskens Kebano almost seized his moment, but his 48th-minute free-kick hit the side-netting.

Although Benrahma’s influence was growing, it was Fulham who continued to make the better opportunities and Bobby Decordova-Reid should have done better when Kebano’s cross came to him, but the ex-Bristol City attacker rifled wide from 12 yards.

Bees head coach had seen enough and Bryan Mbeumo made way for Emiliano Marcondes on the hour mark, with the Frenchman’s dejection clear as he left the pitch.

A mazy run from Benrahma was stopped by Tom Cairney soon after, with the Fulham captain shown a yellow card, while team-mate Michael Hector had a stroke of luck when his handball inside the area was missed.

During the two league games this season, it was Frank’s men who had claimed bragging rights and Ollie Watkins forced Marek Rodak into his first meaningful save when he drilled at goal from 20 yards, but the goalkeeper parried over.

Parker responded with Anthony Knockaert and Mitrovic ready and stripped, but only the former was introduced and, in another surprise, the lively Kebano was replaced.

With his fluorescent yellow bib back on, Fulham’s top goalscorer carried on his stretches before he did enter the fray in the 91st minute, yet he could not stop extra-time being required, with cautions more regular than chances.

A moment of magic or a mistake seemed the most likely way for the opener to arrive now and in the 105th minute a huge misjudgement by Raya proved costly.

Norgaard was booked for a foul on Onomah and, although Mitrovic was also cautioned for throwing Marcondes to the floor before the free-kick was taken, when it was the deadlock was broken by full-back Bryan.

Everyone expected the defender to produce a cross, but he curled a clever effort inside the near post from 35 yards on the left-hand side to stun Brentford and in particular Raya.

It sparked wild celebrations, which only grew in the 117th minute.

Bryan got forward again and exchanged passes with Mitrovic before he slotted home for the first brace of his career.

Dalsgaard headed one back for Brentford in the fourth minute of stoppage time, but this was already Fulham’s night.