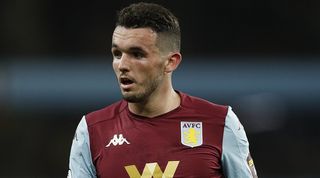 Dean Smith has warned potential suitors off John McGinn after the Aston Villa midfielder turned in another impressive performance on Saturday.

The Scotland international helped the Villans to a 2-1 win against Brighton as Smith’s side extended their unbeaten run to four games in all competitions.

McGinn did not find the net in the defeat of Graham Potter’s men, but he has scored goals at Arsenal and Tottenham already this term.

The 25-year-old has made a seamless step up to the top tier after helping Villa secure promotion in 2018/19.

He was linked with Manchester United even before the campaign began, and he has done very little harm to his prospects of a big-money move with his displays so far this season.

However, Smith refused to countenance a sale in his post-match press conference on Saturday, before praising the qualities that have helped McGinn adapt to life at the top table.

“The big clubs can come calling but they’ll get a short, swift reply!” he said. “He’s a player we want here at Aston Villa.

“His value shot up from the moment he stepped out onto the Villa Park pitch and showed just what a player he is.

“He has an unbelievable energy level and a big, big heart, but people don’t see the technical side of it as well – he’s got that in abundance."

McGinn himself laughed off links with United in the summer, insisting that he still has "so much left to learn and prove."

He also spoke of his desire to focus on the next five years at Villa after signing that long-term deal, but the situation could change if he continues to thrive in the Premier League this term.

Villa's victory over Brighton this weekend moved them into 11th place, three points clear of the relegation zone.

The 10 best Manchester United vs Liverpool games of all time