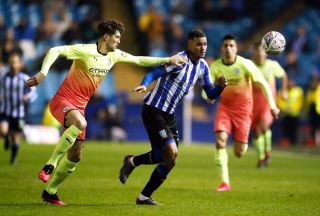 John Stones believes Manchester City have found another gear in their quest for even more silverware under Pep Guardiola.

City have won eight of the last nine trophies available to them in England after securing a hat-trick of Carabao Cups on Sunday.

The midweek 1-0 win at Sheffield Wednesday, courtesy of Sergio Aguero’s solitary strike, kept City on course to defend the FA Cup and they now face Newcastle for a place in the semi-finals.

The 2018-19 #EmiratesFACup champions secured their place in the quarter-final thanks to yet another Sergio Aguero goal 🙌— The Emirates FA Cup (@EmiratesFACup) March 5, 2020

When asked if momentum was building at the sharp end of the season, Stones replied: “I think so.

“We’ve got to be confident within ourselves and know what we’re capable of, but we’re humble about it, which is a great way to go about yourself.

“It was a tough night and to keep momentum going against difficult opposition, coming off the back of two previous games – they’re very positive signs for us, so yeah.”

Humility was the key word for Stones with City’s latest stride towards further honours following last week’s Champions League victory over Real Madrid at the Bernabeu and Sunday’s triumph against Aston Villa at Wembley.

“I think that’s why we’ve done so well in recent years,” Stones said.

“That’s a big thing. Sometimes big clubs come away to places and almost think they’re going to push teams over and we never do that.

“We’ve had two big games really coming into this, two great big occasions and it was a different scenario tonight.

“We were facing an opponent we don’t really know, or watch every week. In the Premier League we know every team.

“So in a short space of time we had to do our homework on them and also treat it the same as the previous two games.

“We’ve had great results out of these games and we can’t rest on that. We knew it was another final today to get through to the next round.”

Sky Bet Championship side Wednesday made life difficult for City, despite rarely venturing into their opponent’s half.

A poor run of results since Christmas has seen Garry Monk’s side fall out of the play-off race, but they were given a standing ovation by their fans at the final whistle.

Owls defender Liam Palmer feels they can take heart for the remainder of the season.

“We were all up for it tonight,” Palmer said. “We owed ourselves and our fans a performance due to the recent form we’ve been in, especially at home, the manner in which we’ve been losing.

“So to put in a strong performance and a show of togetherness, that’s pleasing for the boys, obviously against a great side.”

Wednesday head to Brentford on Saturday after winning only one of their last nine league matches.

Palmer added: “You know you have to be at your best playing against players like that and if we have that mentality for the rest of the games and perform like that we should be alright.”