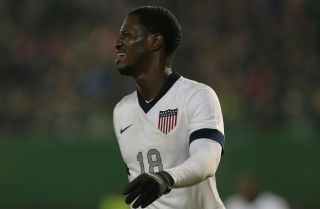 The 30-year-old appeared at the World Cup in 2006 and was on the pre-tournament roster for the competition four years later, but has been out of form since moving to DC United in January.

Johnson has not scored in eight MLS appearances since his high-profile move from Seattle Sounders and his absence is the main talking point in Klinsmann's initial 30-man party.

AZ striker Aron Johannsson is among the more youthful call-ups, with the US likely to rely on the experienced trio of Landon Donovan, Jozy Altidore and Clint Dempsey to provide their attacking threat.

Goalkeeper Tim Howard could join Donovan, Dempsey and DaMarcus Beasley in reaching 100 caps for their country while there is room for five players who did not feature in qualifying.

"First of all, we want to thank all of the players who have been a part of the process these last three years," Klinsmann told the USMNT website.

"It's been an incredible journey and everyone has worked tremendously hard. We had some difficult decisions to make and we are very excited about the 30 players coming into camp.

"There is competition in every position and these next couple of weeks will allow us to make the final determinations on the best 23-man unit to represent the United States in the World Cup."