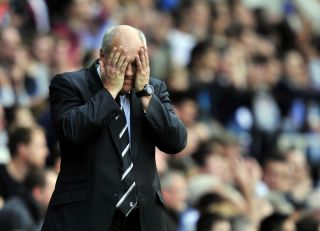 The Cottagers were particularly poor in the first half and failed to recover from goals scored by Rickie Lambert and Jay Rodriguez.

Jol's side were lucky to only be trailing 2-0 at the break and although they showed some improvement in the second half, they never looked like salvaging anything from the game at St Mary's Stadium.

The defeat leaves the London club down in 14th place and former Tottenham boss Jol was at a loss to explain their performance having travelled to the south coast with back-to-back wins under their belt.

"They (Southampton) are very strong athletic, aggressive. You have to match them and if you don't you will lose these games." Jol told Sky Sports.

"You have to be at the end of corner kicks or crosses. The boy (Lambert) scored the first goal at the back post and the second was almost the same, so that was disappointing and we should have done better.

"We did in the second half but the first we didn’t do it and the most disappointing this for me is we didn't create anything ourselves.

"If you score one goal you are back in the game, of course they were the better team but if you get a goal it can be exciting. But we didn't create anything.

"In the Premier League you have to be tough and pick yourselves up, but today they were the better team and to lose 2-0 and to play like that was disappointing."