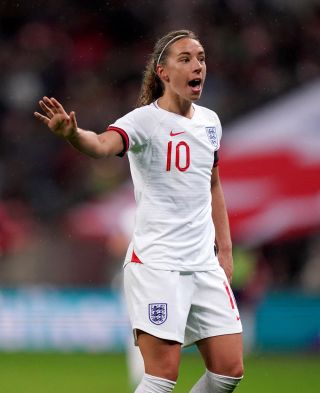 England midfielder Jordan Nobbs knows the impact being a host nation at a tournament can have and hopes the Lionesses experience a galvanising effect at Women’s Euro 2021, which starts in 500 days.

The Football Association has revealed Old Trafford, the home of Manchester United, will stage the opening fixture featuring Phil Neville’s side.

Nine other grounds from up and down the country will host matches at the 13th edition of the tournament, and England will hope to follow in the footsteps of reigning champions Holland, who won on home soil in 2017.

Under then-boss Mark Sampson, the Lionesses lost 3-0 to the host nation in the semi-finals at De Grolsch Veste, and Nobbs remembers the influence of the crowd before and during the clash.

“Our bus was going 1mph with a sea of orange banging the bus,” said the Arsenal player. “I was stood up on the bus looking over and seeing the crowd.

“It was absolutely incredible just to see. Always turning up to a game and seeing your home fans is a great feeling, so Euro 2021 will be a great place for that.”

When England first started drawing up plans to host the tournament, a smaller venue was set to be used for the opener, but the growth of the game since last year’s World Cup has allowed them to think big and use Old Trafford.

Matches will be played all across the country too, with fixtures in Southampton, Brighton, Milton Keynes, Sheffield, Rotherham, Manchester, Leigh and London, with the final being staged at Wembley.

“I think the whole tournament in itself is exciting for us, let alone being at a major stadium like Old Trafford. And I think every time we play at a big stadium or Wembley, it is another amazing time for the women’s game and for us to look forward to,” Nobbs said.

“For the development of the women’s game, whenever we travel around it is more exciting for us and the crowds that we get.

“When I went home to Middlesbrough, we sold out. For the likes of us homegrown players from up north to go home and see that support – even though the women’s game might not be as strong up there as it is down south – is incredible for us. It gives better opportunities for everybody to come to games.”

Nobbs has a bigger desire than most to make Euro 2021 after missing out on the last World Cup having suffered anterior cruciate ligament damage.

The knee injury, sustained in November 2018, saw her sidelined for close to a year, but she got to sample the atmosphere out in France after agreeing media work with the BBC.

Being slightly out of the football bubble, Nobbs was also able to witness the huge growth of the women’s game from a different perspective.

“I was seeing all the sponsorship coming in, all the attention,” she said. “The amount of appearances I was getting asked to do, that was before the World Cup had even started and we had kicked a football.

“The fact we are doing something 500 days before Euro 2021, it has shown people are now interested before the tournament has started, whereas I think in the past it has been after the tournament where people have gone ‘England are alright’.”

A big inspiration for Nobbs when it comes to putting injury heartache behind you is England captain Steph Houghton, who missed successive major tournaments in 2007 and 2009.

Houghton fought back from a broken leg and then a damaged cruciate ligament to become one of the leading figures in the women’s game.

Nobbs said: “I think you would have to be a very lucky player to never have an injury in your career, and even when you look at the England squad.

“The likes of Steph Houghton missed out on tournaments when she was younger and look at how incredible her career has been. I think you have to take the good with the bad.”