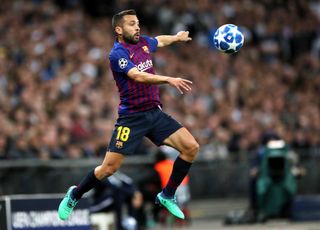 Barcelona have been dealt another injury blow after Jordi Alba suffered a groin strain in the 2-1 victory over Getafe.

The Spain full-back was forced off in the first half of Saturday’s clash, with the club later confirming he had picked up an injury.

A statement on Barca’s official website read: “Tests carried out on the first-team player Jordi Alba have confirmed that he has a groin strain in his right leg.

⚠️ INJURY UPDATE | Tests have confirmed that Jordi Alba has an injured right adductor. He is out and his recovery will determine his availability. pic.twitter.com/jeyltdYUWM— FC Barcelona (@FCBarcelona) February 15, 2020

“The player’s recovery will dictate his return to action.”

Barcelona have some key matches coming up, with their Champions League trip to Napoli on February 25 closely followed by an El Clasico clash with leaders Real Madrid.

The Catalan club are already without the likes of Ousmane Dembele and Luis Suarez.