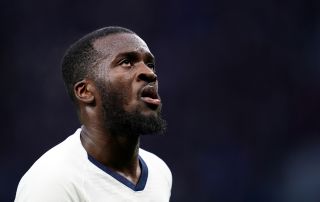 Jose Mourinho is backing Tanguy Ndombele to come good at Tottenham and said it is “no drama” that he is not in the starting lineup.

The France international arrived at Spurs in a club-record deal a year ago, but has hardly lit up north London since his arrival.

He has been beset by injury problems and has been left on the bench by both Mauricio Pochettino and Mourinho, who has publicly criticised his performances and fitness.

Reports have emerged from France that Ndombele is not happy and wants to leave, though Mourinho has shut them down and the Portuguese sees no reason why the midfielder cannot become a success at Spurs.

“Nothing happens when a player has no talent,” Mourinho, who hinted Ndombele will be involved at Sheffield United, said.

“I know when I arrived there were problems. Injuries, small injuries, physical condition and that broke that initial impact when a player starts working with the manager and it broke the immediate impact you can have with other players.

“Football is full of players who have made difficult starts and then ended well.

“When Luka Modric arrived at Real Madrid after six months he was labelled the worst signing in their history.

Ndombele has been an unused substitute in Tottenham’s last three games, one before the break and the first two afterwards, which has drawn even more attention to his situation.

But Mourinho says too much attention is paid to the players who do not play at Spurs.

“You can face the season, you can face all the competitions and then the players, the fans, you the press, everyone has to understand that when you have lots of good players, you can only start matches with 11.

“I hope that next season that we have even more top players on the bench because it means we have to be bigger than where we are now so when a top player is on the bench it doesn’t mean there’s a story behind it. It means that there’s lots of other options.

“There is no problem, there is no story. We are a big club with very talented players.”