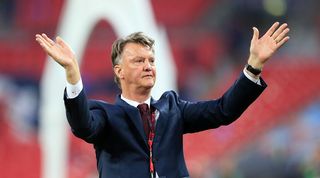 Van Gaal was officially fired two days after United's 2-1 victory over Crystal Palace in the 2016 FA Cup Final, but rumours of his departure began circulating on the day of the Wembley showpiece.

The defeat of Palace was the Dutchman's last game in charge after two seasons at Old Trafford.

United's FA Cup triumph brought the club their first piece of silverware since Alex Ferguson's retirement in 2013, although a fifth-place finish in the Premier League was deemed unsatisfactory by the board.

Jose Mourinho, who had worked with Van Gaal at Barcelona, was appointed as his successor.

And Mata has lifted the lid on Van Gaal's message to the United squad after guiding them to FA Cup success.

"At the end of his time at the club, on his farewell, he let his emotional side take over and opened himself very honestly to us: 'I don't know if I'm going to be here next season, but I want to tell you anyway how proud I am of every single one of you,'" the Spaniard wrote in Juan Mata: Suddenly A Footballer, as reported by the Daily Mirror.

"'We fought together in adversity and ended up lifting this special trophy. That is something that nobody will be able to change. Thank you to all of you.'

"We had just won the FA Cup minutes earlier and he was saying 'goodbye and good luck'. He handed out pieces of paper to each of us with our return date on it, as he had organised the pre-season for next July.

"We all knew this was a routine process, going through the motions, because there were already so many rumours of him being sacked. Only minutes after lifting the FA Cup trophy, they would end up being true."

Van Gaal has been out of work since leaving United and officially announced his retirement from management earlier this year.