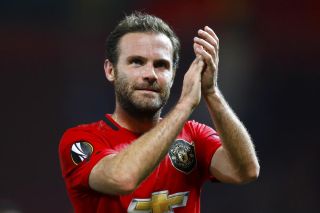 Juan Mata believes Manchester United can kickstart their season with victory over arch-rivals Liverpool this weekend.

United have endured a troubled start to the campaign and already trail the Premier League leaders from Merseyside by 15 points heading into Sunday’s clash at Old Trafford.

Writing in his blog on the club’s website, Spanish midfielder Mata said: “On Sunday we have a great chance to change the dynamic and we are all very motivated to take the win.

“We are United, we are playing at home and we will give everything to be able to take the victory that our fans deserve in such a special game.”

United are waiting on news of the fitness of goalkeeper David De Gea, who was injured playing for Spain on Tuesday.

De Gea could be facing a lay-off after suffering an abductor muscle injury and limping off as Spain qualified for Euro 2020 by drawing 1-1 in Sweden.

Mata wrote: “The bad news from that game was that David wasn’t able to finish the match due to an injury problem after making some great saves. I hope that it won’t be anything major and he can be back with us soon.”