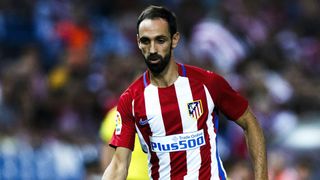 Juanfran is adamant Atletico Madrid will beat Real Madrid when the two LaLiga rivals meet after the international break, despite Saturday's shock loss at Real Sociedad.

Atletico have a chance to regroup heading into the international break but Juanfran has already set his sights on the Madrid derby on November 19.

"Atletico Madrid now have more time to plan ahead for this important game," the 31-year-old Spanish defender said.

"We approach it with our heads held high and I'm sure that at home we'll win."

As for the result and performance itself, Juanfran added: "There are no excuses.

"We were aware of the potential that Real [Sociedad] had and they played a good game.

"They were better than us and we must congratulate them. Now we need to think ahead to the next game."