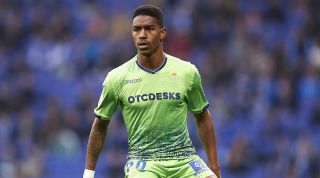 Liverpool are leading the race to sign Real Betis left-back Junior Firpo, according to Mucho Deporte.

Jurgen Klopp is on the lookout for an understudy to Andy Robertson following Alberto Moreno's exit.

The 22-year-old has a £45m release clause but reports suggest Betis would be willing to listen to offers of £27m.

The Reds are also considering including Divock Origi, who only has a year left on his contract, as a makeweight.

However, Barcelona have also been keeping tabs on the youngster as they seek a long-term successor to Jordi Alba.

Junior, who can also operate as a left midfielder, made 29 appearances for Betis last season.

New Premier League kits 2019/20: EVERY released home and away shirt