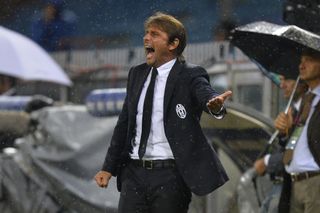 Conte's Serie A champions have started the season in superb fashion, posting league victories over Sampdoria and Lazio, as well as beating the Rome club in the Supercoppa Italiana.

Their league win over Lazio saw them score twice in each half as they cruised to a 4-1 success, and new signing Carlos Tevez has netted in all three fixtures he has played for Juve since a close-season move from Manchester City.

Inter have also started well though, under new manager Walter Mazzarri, and wins against Genoa and Catania see them sit second in the table.

Conte knows how important Inter – who finished a disappointing ninth last term – will view the match against the champions.

He said: "It is a very important game from a psychological point of view, especially for Inter.

"Tomorrow we'll have to be fully alert. It is a big match but it's still worth three points just like every other game.

"Mazzarri is an excellent coach and good at getting the best out of the players he works with.

"Mazzarri has a fine group of players at his disposal. Inter can aspire to enjoy an excellent campaign.

"We know how they play, we'll need to watch out for (Ricky) Alvarez and (Rodrigo) Palacio on the counter, as well as their wide players."

Conte also rejected the suggestion he would rest any players ahead of Tuesday's UEFA Champions League trip to FC Copenhagen.

Andrea Barzagli (Achilles) and Mirko Vucinic (knee) are still in doubt ahead of Saturday's match, but Conte is hopeful they will both feature in the Derby d'Italia.