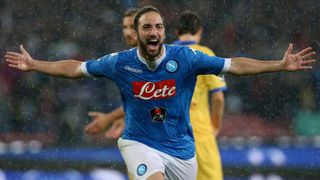 Napoli forward Gonzalo Higuain is still a long way from a potential move to Juventus, according to the Serie A champions' director Fabio Paratici.

Argentina international Higuain has reportedly emerged as a target for Juve, while Arsenal have also been linked with a move for the 28-year-old.

Napoli had described talks of a potential deal with their rivals as "nonsense".

Higuain's future is seemingly still a long way from being sorted and Paratici said there were no talks with Juve yet.

"All the big clubs know that their top players can receive tempting offers," he said.

"At Juve, for example, we have the [Leonardo] Bonucci and [Paul] Pogba interest from many clubs and are prepared for possible replacements. That is what Napoli would be doing as well, certainly.

"However, Higuain for us is a distant thing. I hear that Napoli like more than one of our players, but I guarantee at this moment there are no offers and no negotiations."

Paratici revealed Juve were interested in the forward before he joined Napoli from Real Madrid in 2013.

"We tried before Napoli to talk with Real but did not reach an agreement," he said.

"Because that failed, we didn't approach him."