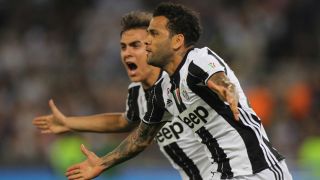 Juventus took their first step towards the treble with an historic 2-0 win over Lazio in the Coppa Italia final at Stadio Olimpico on Wednesday.

First-half goals from Dani Alves and Leonardo Bonucci secured an unprecedented third triumph in a row in Italy's premier cup competition and the 12th in their history.

It also means Juve's hopes of winning Serie A, the Coppa and the Champions League in a single season for the first time remain firmly intact.

Lazio, winners in 2013 and beaten finalists against the same opponents two years ago, hit the post through Balde Keita early on but found themselves behind soon afterwards thanks to a sixth goal of the season from Alves, who started on the right side of the attack for Massimiliano Allegri's favourites.

Juve pressed their advantage, doubling their lead through Bonucci with 24 minutes played, and it was a lead they rarely looked likely to surrender despite a drop in intensity after the break.

Neto – again preferred to Gianluigi Buffon in the cup – made a handful of good saves but Lazio ultimately toiled in vain as they suffered a second final defeat to Juve in three seasons.

They now head into a weekend match with Crotone knowing that a win will guarantee the league title with a game to spare, before they turn their attention towards the Champions League final with Real Madrid on June 3.

Lazio came within inches of the opener after only five minutes, Keita racing beyond Andrea Barzagli on the break before seeing a shot deflect off Bonucci, onto the near post and out.

Gonzalo Higuain teed up a fierce volley that Thomas Strakosha did well to parry, but he was caught out by Alves' finish after 12 minutes as Juve snatched the lead.

Alex Sandro found space down the left and looped a superb cross towards his compatriot at the far post, who bounced a volley off the turf, over the goalkeeper and into the net from six yards out.

Juve pushed for a quick-fire second and Strakosha kept his side in it with three exceptional saves, denying Paulo Dybala twice from distance before making a brilliant block to stop Higuain from slotting in from barely a yard out.

But Juve made the most of some slack defending to double their lead midway through the half, as Alex Sandro flicked on a corner to allow Bonucci – arriving unchallenged into the six-yard box – to tap home.

Lazio spurned chances to halve the deficit before the break, with Ciro Immobile heading wide and Sergej Milinkovic-Savic nodding straight at Neto from a corner, while substitute Felipe Anderson brought a good low save out of the Juve keeper as they kept up some pressure early in the second half.

Neto then reacted brilliantly to claw an Immobile header away from the bottom corner as Juve's lacklustre start to the second half continued, although Alves and Higuain twice fashioned chances to make it 3-0 only to see the moves fall apart in the penalty area.

Simone Inzaghi's side kept pushing in the closing stages but had little to show for their efforts, as Allegri celebrated his sixth trophy in only his third season in charge.