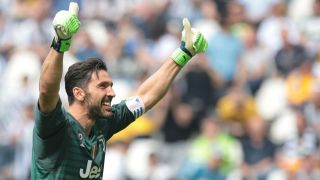 Gianluigi Buffon signed off in style as Juventus celebrated their seventh straight Serie A title with a 2-1 victory over relegated Verona.

Having already wrapped up the Scudetto, it was party-time in Turin for Massimiliano Allegri's men, with Buffon taking centre stage on his final game for the Bianconeri.

The Italy goalkeeper announced on Thursday that he would be calling time on his 17-year Juve career at the end of the campaign, although it is not yet clear whether he will retire altogether.

And the 40-year-old provided the highlight of a sluggish opening period, making a fine save to parry away Mohamed Fares' strike, while Paulo Dybala clipped the woodwork at the other end.

Juve wasted little time in asserting their authority following the restart, however - Daniele Rugani capitalising on Nicolas' error in the 49th minute before Miralem Pjanic converted a superb free-kick.

Buffon stole the limelight just after the hour, receiving a standing ovation as he made way for debutant Carlo Pinsoglio and bid an emotional farewell to the Bianconeri faithful.

Alessio Cerci pulled one back for Verona before Stephan Lichtsteiner - also making his final Juve appearance - failed to convert from the penalty spot as the Serie A champions ended another successful campaign in winning fashion.

Buffon was called into action on 16 minutes, reacting sharply to keep out Fares' curling effort - much to the pleasure of the home faithful.

Mario Mandzukic should have put Juve ahead shortly after, only for the Croatia striker to head straight at Nicolas following good work from Douglas Costa.

Refusing to be outshone by his illustrious counterpart, Nicolas was also on top form just after the half-hour, lunging to his right to tip Mandzukic's acrobatic strike over.

Dybala nearly grabbed the opener with a wonderful attempt just before the interval - Nicolas only able to watch on as the playmaker's delicate chip rebounded away off the crossbar, while Mandzukic's poor showing in front of goal continued as he hooked over from close range.

Juve did not have to wait long after the restart, though, as Rugani tucked home on the rebound after Nicolas had spilled Costa's low strike.

The floodgates were open, and Pjanic netted Juve's second three minutes later with a sublime free-kick that nestled into the top-left corner.

Buffon had to be alert on the hour, rushing out to prevent Ryder Matos going through after Rodrigo Bentancur conceded possession.

That was to be Buffon's final act in a Juve shirt, the veteran making way moments later to a standing ovation from the crowd, a guard of honour as he reached the touchline and tears in the stands.

Juve's hopes of setting a new Serie A clean sheet record were ended in the 76th minute, Cerci taking advantage of sloppy defending to nudge home from close range.

Enrico Bearzotti was harshly adjudged to have handled in the area with five minutes to go, handing Lichtsteiner the opportunity to end his Juve career with a goal, but the full-back's tame effort was easily kept out by Nicolas.

While the match continued, Buffon was embarking on a hand-shaking mission among the Juve fans with Lichtsteiner also afforded a late send-off.