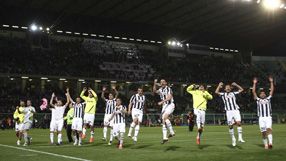 Leaders Juventus have a fully fit squad to choose from for Sunday's home game with AS Roma as the Turin side aim to go one step closer to breaking Inter Milan's 2004/05 record of 38 games unbeaten in all competitions from the start of a season.

Juve are on 36, a club record, and could be aided by Roma still being without top defenders Juan, Nicolas Burdisso and Marco Cassetti.

Gazzetta dello Sport on Friday linked Juve with a bid for Chelsea's Didier Drogba in the close-season.

Second-placed AC Milan, a point behind Juve with six games left, host Bologna on Sunday with their injury list beginning to clear but Alexandre Pato, Thiago Silva, Kevin-Prince Boateng and Massimo Ambrosini are likely to be out.

"We are getting players back. Some will be ready for Genoa [in midweek] and some for Siena [next weekend]. The situation is improving," chief executive Adriano Galliani told reporters before hinting he would one day like the San Siro's troublesome turf to become synthetic.

Lazio, enjoying another astonishing season in third, will be without midfielder Cristian Brocchi for Sunday's visit of lowly Lecce and the rest of the season after doctors said he would be out for three months with a foot injury.

Fourth-placed Udinese return to action for the first time since Piermario Morosini, who was on loan at Serie B side Livorno, collapsed on the pitch and died last weekend.

Francesco Guidolin's team, three points behind Lazio in the third and final Champions League berth, travel to mid-table Chievo on Saturday having not trained on Thursday because of the funeral.

Napoli's slip down the table will not be helped by forward Ezequiel Lavezzi suffering a leg muscle problem and being ruled out of the sixth-placed side's home game with second-bottom Novara on Saturday as they battle for a Europa League berth.

On the plus side for the Naples club, a statement said much-hyped playmaker Marek Hamsik has signed a new contract until 2016.

Inter Milan travel to struggling Fiorentina on Sunday with their hopes of snatching third spot still not over despite sitting six points behind Lazio.

Centre-back Walter Samuel is suspended while playmaker Wesley Sneijder is a doubt.

High-profile strike duo Vincenzo Iaquinta and Adrian Mutu could return from injury for Cesena's home game with Palermo on Sunday where defeat for the bottom-placed Seahorses will bring relegation if Genoa get a point against visitors Siena.

Despite bringing in some big names, the north-east club have struggled all season and lie 15 points from safety with six games left.