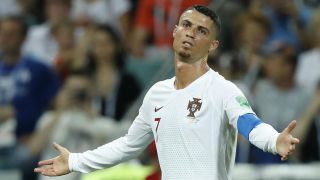 Juventus' shock signing of Cristiano Ronaldo should give AC Milan optimism about becoming "great again" as they go through a turbulent period in their history, according to Serie A great Kaka.

Despite being one of Italy's biggest clubs, Milan have endured a difficult few years, failing to finish in the Champions League spots since the 2012-13 campaign.

The best Milan have done since then is two sixth-place finishes in the past two seasons, while they also have financial difficulties.

Their hopes of bridging the gap to champions Juve next term were surely dashed with their signing of reigning Ballon d'Or holder Ronaldo, but Kaka – who enjoyed seven years in Milan across two spells – has a rather more optimistic outlook.

The Brazilian thinks Milan should actually use the signing as inspiration and evidence that significant setbacks do not always result in eternal doom and gloom.

"I prefer to see the positive side [about Ronaldo's signing]," Kaka told Omnisport.

"This thing has to be an example for Milan. Even with a negative period, it's possible to become great again.

"They have to take advantage of this moment because the attention is on Italian football.

"Cristiano Ronaldo brings many good things to Italian football; media, sponsors and supporters keen to see him and Italian teams.

"For Italian football, it's the moment to take advantage of this player."