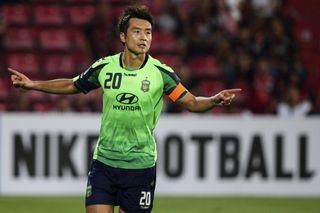 Jeonbuk are unbeaten in their last five league matches since South Korea's top flight resumed at the start of the month following a mid-season break and that return has left Choi Kang-hee's men in second place, just two points adrift of leaders Pohang Steelers.

A superb defence has been one of the key components of Jeonbuk's success with their rearguard having been breached on just 11 occasions, fewer than any other team in the league, while at the other end Lee Dong-gook has contributed seven goals.

However, a 0-0 draw at Ulsan last time out halted Jeonbuk's momentum to a certain extent and the fourth-placed Dragons are sure to provide stern opposition at the Jeonju World Cup Stadium.

Jeonnam may have lost 2-0 to Jeju United last time out, but in Lee Jong-ho they possess the league's top scorer and Ha Seok-ju's men will be hopeful of bouncing back quickly.

The Steelers are also in action on Sunday and face a visit to fifth-placed Suwon Bluewings, who have only lost once at home in the league this season.

Sunday's other fixture sees strugglers Gyeongnam welcome Seoul, who are looking to move level with sixth-placed Ulsan and boost their hopes of reaching the championship round.

On Saturday, Sangju Sangmu will aim to snap a three-match winless league run when they host Seongnam at the Sangju Stadium.

Sangju have fallen seven points adrift of a top-six berth and a 2-1 setback at Seoul in their previous outing followed a 6-0 battering at the hands of Jeonbuk Motors.

Elsewhere on Saturday, Jeju United could go second with a win at Busan I'Park, while rock-bottom Incheon United look for a second win of the season at home to Ulsan.