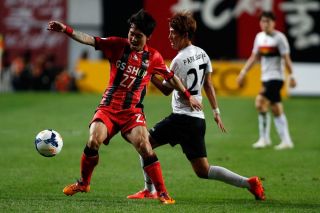 The five-time champions are unbeaten in their last five games and earned a dramatic 1-0 win at Pohang Steelers last Sunday thanks to an 86th-minute strike from Everton Santos.

That victory made it two wins over defending champions Pohang in less than two weeks for Seoul following a penalty shootout triumph against the same opposition in the quarter-finals of the AFC Champions League.

Seoul's run of form has seen them move within a point of Ulsan in sixth place with 10 games remaining before the league splits into a Champions Round and a Relegation Round, with six teams in each.

And, with Ulsan travelling to take on title challengers Suwon Bluewings, Choi Yong-soo's men should be confident of overtaking them with three points against a Seongnam team who sit just four points off the bottom.

Pohang, meanwhile, will aim to bounce back from their loss to Seoul against a wounded Jeonnam Dragons side who saw a three-game winning streak ended emphatically with a 6-2 reverse to Jeju United.

Even if Pohang get back to winning ways they appear unlikely to bridge the three-point gap to leaders Jeonbuk Motors, who should have little difficulty recording their 15th league win of the campaign against second-bottom Busan I'Park.