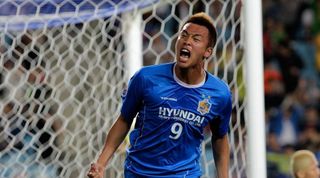 Just five points separates the third-placed Suwon Bluewings and sixth-placed Ulsan ahead of the latter's fixture against Jeonnam Dragons on Saturday and the former's clash with Jeju United on Sunday.

Ulsan will be hoping to rise up the standings when they host fifth-placed Jeonnam with the Dragons three points ahead of Cho Min-Kook's team after 19 rounds but with an inferior goal difference.

Jeonnam have lost their past four visits to Ulsan, while they last won at Munsu Cup Stadium in 2008.

Ulsan have won seven of their past nine matches against Jeonnam, while they have the equal-second best goal-scorer in the league - South Korea international Kim Shin-wook, who scored his eighth goal on Tuesday.

But Jeonnam also have an impressive striker with Lee Jong-ho on nine goals for the season, level with Jeonbuk Motors' Lee Dong-gook at the top of the goal-scoring charts.

Jeonbuk (38 points) have a one-point advantage at the top of the table from Pohang Steelers after leapfrogging the reigning champions a week ago.

Jeju could claim third spot with a win at Suwon, although they have lost their past two meetings with the Bluewings.

The Steelers will begin the weekend's action on Saturday with a trip to Sangju Sangmu before Seongnam host Jeonbuk, who have not lost in nine league fixtures.

On Sunday, Incheon United will take on Gyeongnam and Seoul will visit Busan I'Park.