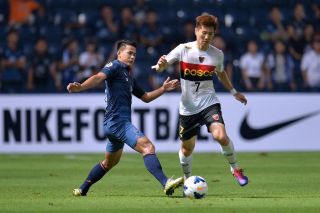 A 42nd-minute strike from Chilean midfielder Hugo Droguett gave Jeju a third win of the campaign, moving them up to fifth.

Incheon United remain bottom of the table - a point behind Sangmu - after a goalless draw with Seongnam, while leaders Ulsan were held to the same result by Busan I'Park.

Arguably the most exciting game of the weekend saw defending champions Pohang Steelers play out a 2-2 draw at Jeonnam Dragons.

Pohang looked to have turned things around after Kim Jae-Sung and Lee Myeong-Ju put them 2-1 to the good following Park Sun-Yong's opener for the hosts.

However, Jeonnam pulled level in the 79th minute, Lee Jong-Ho scoring his second goal of the season to deny Pohang a fourth straight league win.

Suwon Bluewings came from behind to draw 2-2 against Gyeongnam.

Song Su-Young and Lee Jae-An put hosts Gyeongnam in command, only for Yeom Ki-Hun and Bae Ki-Jong to both net and salvage a point for Suwon.

A weekend of five draws also saw Seoul fight back to secure a 1-1 scoreline at home to Jeonbuk Motors.