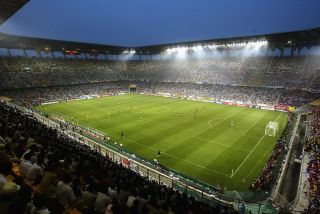 Kim Cheol-Ho scored the only goal of the game in the second half at the Munsu Cup Stadium to ensure the hosts are now without a win in three games in all competitions.

Ulsan were held to a goalless draw at Busan I'Park on Sunday and were toothless once again, as champions Pohang Steelers and Jeju United took advantage by securing victories which moved them level on points with Cho Min-Kook's men.

Kim Seung-Dae helped himself to a second-half brace to double his K-League tally for the season in the Steelers' comfortable 3-0 home victory over Gyeongnam.

Kang Soo-Il had opened the scoring seven minutes before half-time as the home side stretched their unbeaten run in all competitions to seven games.

Kim has now scored in his last four games for the club.

Park Kyung-Hoon's United side leapfrogged Jeonbuk into third spot with a 2-0 win, which came courtesy of second-half goals from Yoon Bit-Garam and Kim Hyun.

Sangju Sangmu recorded their first league victory of the season at the seventh attempt by seeing off FC Seoul 2-1.

Ha Tae-Goon put them in front just before the half-hour mark and Lee Keun-Ho sealed the points after Sergio Escudero had come off the bench to equalise for the visitors.

Incheon United are now the only side still awaiting their first K-League triumph of the campaign, but the rock-bottom side were able to take a point from a goalless draw at home to Busan I'Park.

Suwon Bluewings were 1-0 winners against Chunnam Dragons in the other game to be played on Wednesday.