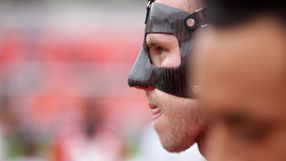 The 27-year-old Czech Republic international, who had his nose broken by two Cologne fans in an incident outside a nightclub earlier this month, sustained further damage despite playing with a carbon face mask in Saturday's 1-0 win over Hannover 96.

"His shattered nasal bone shifted further despite the mask," Leverkusen said in a statement on Monday before adding he would be out for 10 days.

Leverkusen, who are fifth in the table, take on Nuremberg on Saturday.