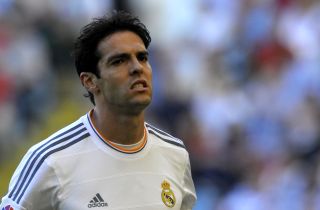 The Brazilian midfielder signed from MIlan in 2009 for €65 million but has only started 61 Liga games in the four years since, and with competition for places at the Bernabeu stronger than ever, he is ready to depart in search of first-team football.

Real boss Carlo Ancelotti has added to his midfield options during the close-season with the additions of Isco and Asier Illarramendi, pushing Kaka further down the pecking order in the Spanish capital.

And the 31-year-old has now go public with his desire to head to pastures new.

"I want to leave," he is quoted as saying to Spanish newspaper AS. "I think it’s the best thing for me and for the club.

"I'm trying to solve it before Monday."

Kaka was speaking after he scored twice in Real's 4-0 friendly victory over Deportivo La Coruna.