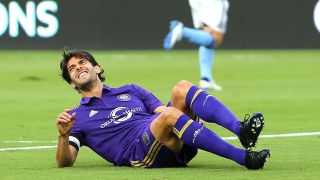 Kaka has been a regular since making his debut for the MLS franchise in January 2015, but recent comments about finding it tough to keep playing at the age of 35 saw speculation about his future begin to mount.

Despite that concession about his physical state, Kaka, speaking at a media conference on Wednesday, refused to comment on the prospect of retiring.

But the 92-cap Brazil international was adamant his time in Orlando has come to an end, with the club 10th in the 11-team Eastern Conference this season.

Kaka will play his final home game against Columbus Crew on Saturday, before bowing out at Philadelphia Union the following Sunday.

Kaka said: "As you all know, my contract with Orlando City ends this year. My final decision is not to renew."

"It's sad, but it's a cycle that's finishing. My decision is clear. My cycle with Orlando City ends this year.

"I will honour this jersey until the end as always. What's next for me is just this moment.

"The only thing I know right now is that I'm not going to be an Orlando City player next season."