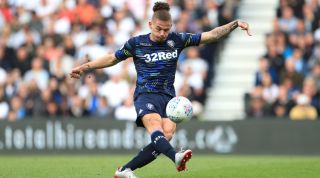 The 23-year-old earned a place in the EFL Team of the Season for 2018/19 after an impressive campaign under Marcelo Bielsa at Elland Road.

The Mirror reports that Spurs are set to make a second offer for the midfielder, but they face competition from Premier League rivals.

Villa have already submitted an £11 million bid, while Newcastle are also interested, but Leeds value the player at around £30 million and are reluctant to sell.

The Championship side are confident that Phillips won’t actively seek to leave his boyhood club and they are prepared to offer him an improved contract, although he rejected their opening offer.

Tottenham have already done business with Leeds this summer, completing a £9 million deal for winger Jack Clarke before sending him back on loan.

They believe the prospect of a lucrative contract offer and Champions League football could be enough to convince the player to leave.