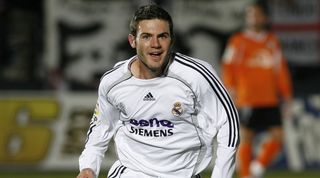 One of the few Borussia Dortmund players that Bayern Munich haven’t sought to pinch (yet), Reus has remained at Signal Iduna Park despite regular links with a move elsewhere – mostly thanks to a patchy injury record.

The forward was actually let go by BVB after being considered too skinny in 2006, but soon demonstrated that a lithe physique isn't necessarily a bad thing – first at Rot Weiss Ahlen and then Borussia Monchengladbach, where Dortmund re-signed him from for €17m in 2011.

He may be a fan favourite at Ajax, but Huntelaar actually began his career at fierce rivals PSV. Signed in 2000, the striker made his senior bow (and only appearance) under Guus Hiddink before heading out on loan to De Graafschap and AGOVV.

The Dutchman's quest for regular football led him to Heerenveen on a permanent basis in 2004, and 39 goals in 60 games persuaded Ajax to fork out €9m for his services two years later.

Mata is best associated with Valencia in Spain, so it's easy to forget that his senior league debut came with Real Madrid Castilla in 2006. Ten goals in 39 matches sparked interest from Los Che, who signed the playmaker by triggering a release clause in his contract.

There was a time when Manchester United may have regretted their decision to let Zieler leave Old Trafford in 2010, but in reality he was unlikely to ever oust (or subsequently succeed) Edwin van der Sar. The German goalkeeper joined Hannover after failing to make the breakthrough under Sir Alex Ferguson, and two loan appearances for Northampton were all he had to show for his time in England.

Zieler went on to play almost 200 times in the Bundesliga, before joining Leicester in summer 2016. After failing to snatch the No.1 shirt from Kasper Schmeichel, however, he went back to the Bundesliga with Stuttgart and his enjoying regular football once more.

Remy may have collected a Ligue 1 winner's medal with Lyon in 2007, but his role in the club's success was a minor one. OL didn't stand in the striker's way when Nice came calling with a club-record bid of €8m in 2008, and the move paid off as he netted 26 league goals in 68 appearances.

The striker went on to represent Marseille, QPR and Newcastle before signing for Chelsea in summer 2014. After a useful stint at Las Palmas in Spain, he returned home to France with Lille in summer 2018.

Eto'o won three La Liga titles and two Champions Leagues at Barcelona, but his career began on the other side of the Clasico divide. The Cameroonian, who played just three times for Real Madrd in La Liga, spent time on loan at Leganes, Espanyol and Mallorca before joining the latter permanently in 2000.

Barça brought Eto'o to Catalonia four years later for €24m, and he went on to become a key player under both Frank Rijkaard and Pep Guardiola, with two Champions League and three La Liga triumphs to his name.

RECOMMENDED ‘It was me that made Barça win, not Messi’ – Samuel Eto’o criticises Pep Guardiola at Barcelona

August 2016 wasn't the first time Pogba signed a contract with Manchester United, of course: the Frenchman initially joined the Red Devils in 2009, but his desire for first team-football led to his departure three years later.

The midfielder ended up at Juventus after Inter and Roma turned down the chance to sign him, and spent four years in Turin before United spent an eye-watering £89.3m to bring him back to the north-west ahead of the 2016/17 campaign.

Barcelona-born Fabregas did the unthinkable in 2003, ditching his boyhood club to join Arsene Wenger's Arsenal. But he became increasingly important to the north Londoners, making his debut aged 16 in 2003 and later being handed the club captaincy in 2009.

The chance to re-join Barcelona two years later was too good to turn down, but ultimately too good to be true: after three relatively unhappy years back home he returned to the Premier League with Chelsea in 2014.

Stoke signed Shawcross from Manchester United for just £1m in 2008, by which time he was ready to leave Old Trafford. The centre-back has been in the Potteries ever since, winning the club captaincy and an England cap along the way – although it later transpired that Sir Alex Ferguson did his best to stop the move.

"He wanted me to sign a new contract and then go out on loan," Shawcross recalled. "I wanted to end my career with over 500 games, and if I’d have stayed at United that wouldn’t have happened."

Florentino Perez loves a buyback clause, and the Real Madrid chief wisely insisted on one when Morata moved to Juventus in 2014. Although the talented young forward was unable to unseat Karim Benzema in Madrid's XI the first time around, he showed his quality by scoring in a number of big matches in Italy – including against Madrid in the Champions League semi-finals.

Perhaps he was put off by the weather, but Rabiot didn't seem too keen to stick around in Manchester in 2008 (mind you, he didn't seem keen to stick around anywhere during his youth career). The midfielder spent just six months at Manchester City's academy before returning home to France, with his mother later claiming that her son was mistreated.

Rabiot thought he'd got his own back when he scored against the Citizens in a crunch Champions League tie in April 2016. Unfortunately for the PSG man, though, Manuel Pellegrini's side prevailed and advanced to the semi-finals. He's just joined Juventus on a free after a bitter end to his career at PSG.

In 2008, Sir Alex Ferguson had a decision to make: Jonny Evans or Gerard Pique? Hindsight means it was an easy decision, but at the time Pique was no world beater. Stuck behind the unflappable duo of Rio Ferdinand and Nemanja Vidic, the Barcelona-born defender opted to re-join his boyhood club in 2008.

At just £5 million, he proved a brilliant acquisition for Barça and collected just about every major honour available – including eight Spanish league titles and three in the Champions League. Decent.