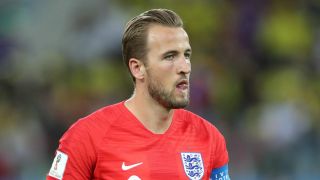 As England prepared for their quarter-final clash with Sweden, Southgate spoke of the importance of the maturity and calmness of their captain, who scored his sixth World Cup goal from the penalty spot in a heated round-of-16 defeat of Colombia.

Southgate heaped praise on Kane's "exceptional mentality", which he said reminded him of the man whose coolness under pressure was pivotal in England clinching the Rugby World Cup in 2003.

"It was three-and-a-half minutes from the penalty being given to when Colombia eventually left him alone," Southgate told reporters, commenting on the way England's opponents protested decisions throughout the game.

"I knew he was fine when he picked the ball up for the fourth time. He reset himself... much like you see Jonny Wilkinson [do] - he has that mentality and calibre."

Kane scored another penalty in the shoot-out that followed the 1-1 extra-time draw with Colombia, and Southgate said the 24-year-old was having a positive effect on the rest of his squad.

"To go through that again and then take another one on the first long wait, all of those things are sending brilliant messages to the rest of the group," said the manager.

"I think he has handled his roles with real maturity and has recognised the importance of being a voice for the team away from the pitch. But also his calmness on the pitch the other night, the way he led by example in terms of his actions but also his communications on the pitch.

"His body language, the way he carried himself, exceptional mentality, real belief in being a top player.

"And you see that commitment every day in his training and his recovery, what he eats and his attention to detail on those things.