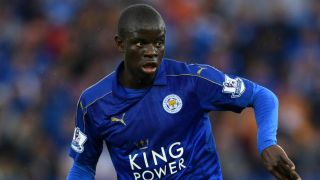 Chelsea have signed a "big player" in N'Golo Kante, according to goalkeeper Asmir Begovic.

The Blues completed the signing of the France midfielder from champions Leicester City on Saturday for a fee that could reportedly rise to £32million.

Kante has put pen to paper on a five-year deal with Chelsea and Begovic welcomed his arrival after the squad's disappointing 10th-place finish last season.

"He is a big player, a huge player for Leicester last season and he had a good impact for France at the Euros as well," Begovic told reporters after playing in Chelsea's 2-0 defeat to Rapid Vienna.

"He is a player we are looking forward to adding to the team. We needed more options. You can never have too deep of a squad so the more options you have, the better.

"Kante adds a lot to our team and will make us better going forward."

Despite Chelsea losing in their first pre-season game, Begovic has enjoyed working under new boss Conte, but said the manager had not yet confirmed whether he or Thibaut Courtois will be the number one keeper.

Begovic said: "He has not explained too much at all. It is just about working hard and trying to buy into what he wants us to do.

"I'm sure those decisions and everything else will come further down the line and we will see what happens.

"Thibaut did well in the Euros. It was unfortunate for Belgium. They obviously wanted to win the tournament with the standards they have set before. He would have been upset to go out in the quarter-finals but he did well, and we are looking forward to having him back with us."

On Conte's methods, Begovic added: "It's been great so far. We are buying into what the manager wants us to do, working hard to try and improve and work in a different way. It's going to take a bit of time, it's a process, but so far so good and over time we will get better.

"It's been difficult, like any pre-season. An ice bath always comes good at the end of the day! We are enjoying the hard work though and we know it's going to benefit us in the long run.

"The work ethic is really strong. I'm sure we have got another few hard days ahead – we have got to get our base fitness."