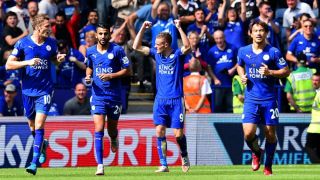 Claudio Ranieri felt his on-song Leicester City side were inspired by the music of Kasabian during Saturday's 4-2 win over Sunderland, claiming the band's music made his players into "warriors".

Dick Advocaat's men were unable to cut off Leicester's supply to Riyad Mahrez, with Jamie Vardy and Marc Albrighton also able to successfully take aim for the hosts and treat the King Power Stadium to a big win on the opening weekend of the Premier League.

While Ranieri's side will be considered underdogs in the top flight this term, the Italian was full of praise for the Leicester-born rock quartet and the affect their hit 'Fire' had on his players when played before the game.

"I think I know the Leicester fans very well," Ranieri told the club's official website following his first game back in England since leaving Chelsea in 2004.

"They are [passionate] supporters and I told my players: 'When you go on the pitch and you hear the song from Kasabian, that means they want warriors.'

"I want to see them as warriors for the fans. Kasabian are a fantastic rock band from Leicester and I think the guitar man, Serge, is Italian.

"It's good and I think [the fans] love fighters. We are fighters.

"I'm very pleased with the performance of the players. I wanted fighters and warriors and this is important for me because there will be matches where you draw or lose because this is football.

"You have to fight, and they did fight."