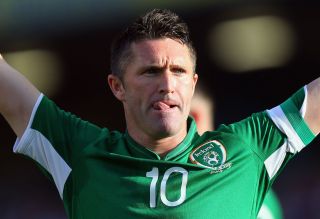 Ireland are in the process of searching for a successor to Italian Giovanni Trapattoni, who departed the role by mutual consent in September after a 1-0 qualifying defeat to Austria all but ended their hopes of reaching the FIFA World Cup.

McCarthy is rumoured to be one of the candidates being considered, a move that would see him return to a position he held between 1996 and 2002.

And LA Galaxy striker Keane - who is his country's record scorer with 60 goals in 129 caps - would support the appointment, while also endorsing fellow hopefuls Martin O'Neill and Roy Keane.

"Why not with Mick, it (returning) happens a lot," said Keane. "Holland have done that a few times. Mick is a great guy, a fantastic guy.

"But if it was Mick, Martin O'Neill or Roy Keane, I don't think you can go wrong.

"As long as it's the right man it doesn't matter, but at this stage I think everybody would like an Irish manager.

"The names who have been mentioned, if any of them took over I think everybody would be happy.

Ireland sit in fourth position in Group C of the European World Cup qualifying section, and complete their campaign when they entertain Kazakhstan on Tuesday.