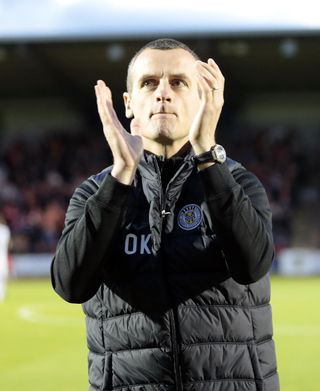 St Mirren boss Oran Kearney has warned play-off rivals Dundee United his side have definitely improved since their last meeting.

The Buddies got the result they were looking for against United’s city rivals Dundee, a 3-2 win, but it was not enough to spare them from finishing second bottom of the Ladbrokes Premiership.

Hamilton’s 2-0 win over St Johnstone means the Paisley outfit now face a two-game clash with Robbie Neilson’s Tangerines next week to save their top-flight status.

United will take confidence from the fact they dumped Kearney’s side out of the William Hill Scottish Cup win back in February at the Simple Digital Arena.

But since then, Saints have lost just three games and their boss believes they now have the vital momentum after registering a six-game unbeaten streak.

Kearney, whose side will be back in Dundee for Thursday’s first leg, said: “United are a good side. They put us out of the Scottish Cup earlier in the season and they have a huge amount to play for.

“We know with everything at stake it’s going to be the way it’s been for the last few weeks, high-pressure games, and we’ve got to let dust settle over the weekend and then pick it up on Monday and go for one last charge.

“But I know we are a better side than when we last played them. The facts don’t lie, so that’s a simple answer.”

Dundee are already relegated but made life difficult for the visitors by taking the lead through Cammy Kerr after 16 minutes.

However, the hosts were left with 10 men when Darren O’Dea – playing his last game before retiring – was sent off for a last-man tug on Brad Lyons.

It took Saints until seven minutes into the second half to hit back, however, with Cody Cooke levelling. He would score two more either side of Scott Wright’s equaliser for the Dark Blues to claim the win and the match ball.

It was not enough, however, to complete St Mirren’s escape act and they must now hold their nerve against United.

“Keeping our unbeaten run going was of huge importance,” added Kearney. “For us that was probably the biggest reason to win the game today.

“Of course, it could have led us to something better if St Johnstone had beaten Hamilton but, more importantly, keeping that record intact going into the play-offs is very important, making sure we have that momentum behind us.”

Dundee had under-18s boss James McPake in caretaker charge for their last game before dropping down to the Championship.

He said: “I wanted a taste of it two years ago. I believe in a way of working, I have a lot of people to advise me and I’ve got my own ideas.

“Apart from the result, I think it’s worked this week.

“It’s been so hectic – it’s been mad but a good mad. What I’ve missed is the day-to-day pressure of first-team football.

“I’ve enjoyed being back in proper football. The under-18s and reserves are great but today was proper football and I’ve not had it since I got injured out there against United.

“The only way I could have bettered the experience was if we’d won the game.”