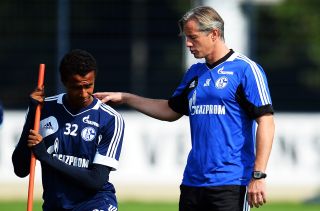 Reports in England and Germany have speculated that Podolski is set for a loan move from Arsenal to Schalke with the Bundesliga club's general manager Horst Heldt having reportedly in London to discuss the deal.

The German media also believe Schalke are set to purchase Polish midfielder Waldemar Sobota from Slask Wroclaw but Keller would not be drawn on either potential signing ahead of his side's clash with Hannover.

"Well we've talked about a lot of players and we won't say anything about anyone in particular," Keller said on Friday.

"There are a few players on our list and we will see what we can do about it and what possibilities there are."

Schalke's season has begun badly with just the solitary victory, plus two draws and a loss from four matches in all competitions.

Keller's team gave up a lead at home against Greece's PAOK on Wednesday to draw 1-1 in the first leg of their UEFA Champions League qualifying play-off, while they have notched a draw and a loss in the Bundesliga so far.

The only win Schalke have managed was a 2-0 triumph over Noettingen in the DFB Pokal and Keller has claimed his players are hurting.

"Well the guys are not crazy, they are aware of the fact that they aren't completely performing to their best and they aren't happy about that," Keller said.

"So no one said, 'well I was great and others weren't'.

"They're all critical of themselves and that's good.

"And I have always said the team has the right character, we just have to make the transition to the pitch.

"And that's what counts in football. No one has ever won by talking."

Keller had told the media after Schalke's 1-1 draw with PAOK that the first half versus the Greeks was 'outstanding', which drew some criticism from fans and pundits alike.

While Keller conceded he may have overstated his team's first-half performance, he maintained he had been pleased with what he had seen.

"That I called the first half against Salonika outstanding was the wrong word," Keller said.

"But I stick to it. I am very happy with the appearance before the break."