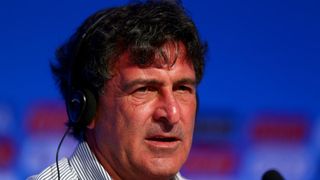 Mario Kempes says he would be "willing" to take charge of Argentina should Jorge Sampaoli be sacked.

Sampaoli has a contract to 2022 but his future is in doubt after La Albiceleste's poor performances at the World Cup.

After qualifying from the group stage thanks to Marcos Rojo's late winner against Nigeria, Sampaoli's side were dumped out by France in the round of 16.

The Argentine Football Association has yet to confirm whether the former Chile boss will be retained, but Kempes is keen to take over.

"It's not easy to carry forward the national team because you have a whole country behind you," Kempes said, as reported by ESPN.

"But I would be willing to take charge of the Argentina national team."

Kempes scored twice in the 1978 World Cup final, winning both the Golden Ball and Golden Boot as Argentina triumphed on home soil.