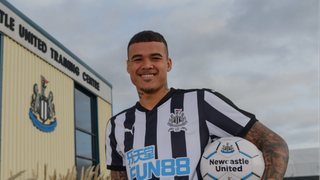 Chelsea wing-back Kenedy has joined Newcastle United on loan for the remainder of the season.

Kenedy will be ineligible for Newcastle's FA Cup fourth-round clash against Chelsea on Sunday, but could make his debut against Burnley at St James' Park next Wednesday.

The 21-year-old is looking forward to working under Rafael Benitez and reuniting with former Blues team-mate Christian Atsu.

"I'm so happy with this opportunity at Newcastle. They've opened the door to me to come here, show my potential and come and play for Newcastle," said Kenedy in a statement.

"It's a traditional club and Rafa Benitez is a fantastic, amazing coach. Christian Atsu, as well – we trained together at Chelsea and know each other, and he said good things about the club. So it was easy to take this decision."

Benitez added: "Kenedy is a player that we have been following since the summer. The reason we are interested is that he can play in several positions – as a winger, a wing back and also as an offensive left full-back, so he gives the team many options.

"He has a great left foot and good energy. He is still a young player but he has some experience already in the Premier League and that will help with his adaptation. We welcome him to Newcastle United."

Kenedy joined Chelsea from Fluminense in 2015 and made 18 appearances in his debut campaign, but he agreed a temporary switch to Watford for the 2016-17 campaign.

The Brazilian's stay with the Hornets was cut short by injury and he struggled to establish himself upon his return to the Blues, making just five appearances in all competitions this term.

It has been reported Chelsea are close to signing Roma wing-back Emerson Palmieri, which would have further limited Kenedy's playing time at Stamford Bridge had he stayed.