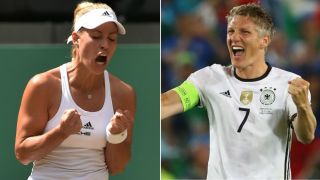 Grand slam champion Angelique Kerber hopes both her and Germany's football team can win through to their respective finals.

Australian Open winner Kerber won through to the Wimbledon semi-finals thanks to a thrilling 7-5 7-6 (7-2) victory over Simona Halep on Tuesday.

Germany are also preparing for the Euro 2016 semis, a showdown with host nation France on Thursday, the same day Kerber meets Venus Williams in the final four at SW19.

And Kerber said she is juggling her Wimbledon bid with her support for Bastian Schweinsteiger and Co. at the European Championship.

"I am looking forward to both actually," Kerber told reporters.

"I think I will start, then I hope that the German football team will make the final then, as well."

"I really enjoy watching the German football team. I'm sure they have also a lot of confidence right now to being in the semis," she continued.